A surge last year in OTT subscriptions in Italy is expected to continue, while a pay TV market that fell in sub numbers is likely to decline, although incumbent Sky still accounts for the bulk of pay video revenues, according to an analysis by Omdia. 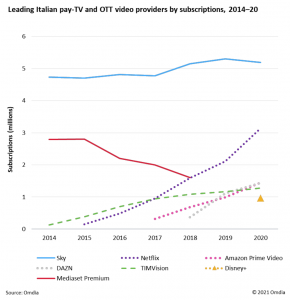 By contrast, the pay TV market declined by a net 127,750 subscriptions, taking its total to under half of that of the streamers.

However, Sky, which saw a sharp decline in its DTH base, partially offset by growth in digital-terrestrial subscribers, still accounts for the lion’s share of pay video revenues, accounting for 78% of the total with sales of €2.4 billion.

Omdia expects streamers to account for all subscriber growth to 2025, but pay TV will still account for a greater part of the revenue pie at that date, albeit by a much smaller margin.

Just under half of the growth in OTT numbers in 2020 came from Netflix and Disney+, which added approximately a million new customers each. Netflix remains by far the largest OTT player in the market, although sports streamer DAZN and Amazon Prime Video both also recorded strong growth in 2020.

While 2020’s decline in pay TV numbers was less precipitous than that of 2019, Sky has been hit both by the shutdown of sports events and by the loss of key sports rights. Omdia expects the Comcast-owned operator to continue to feel pressure as DAZN will control the bulk of Serie A rights going forwards, while Amazon holds rights to the UEFA Champions League. Sky also did not benefit as much as expected from Mediaset’s withdrawal from the DTT pay TV business, according to the analyst house.

“As Sky is the main pay TV player in Italy, DAZN’s capture of key sports rights from Sky makes it a leading sports destination for sports fans, exacerbating the declining role of traditional pay TV in the Italian market even further,” said Rob Moyser, senior analyst and author of the report.

Rival pay TV player Telecom Italia (TIM) has meanwhile benefited from a focus on sports rights and its alliance with DAZN. Both Sky and TIM have moved towards becoming super-aggregators of third-party streaming services, with Sky complementing this approach with investment in originals.

Among OTT players, Netflix has benefited from distribution on Sky, but has seen growth slow down following the launch of Disney+ and the diminishing of take-up due to the pandemic.