TV revenues in Spain fell by a substantial 10% last year as the impact of the COVID-19 pandemic made itself felt on the economy, despite strong growth in pay TV numbers. 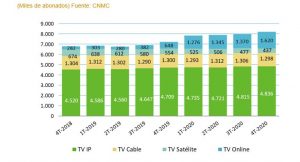 According to the latest figures from markets regulator the CNMC, pay TV numbers passed the eight million mark for the first time last year, with 8.2 million Spaniards signed up for services by the end of the year. The figure represented growth of one million on the previous year, or 13.6%. 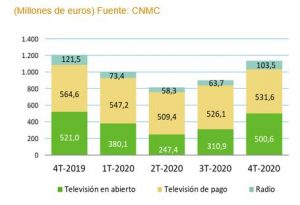 Despite the growth in numbers, pay TV revenues in the fourth quarter were down year-on-year, at €531.6 million compared with €564.6 million.

Free TV revenues, derived mostly from advertising, were also down, with FTA broadcasters’ revenues for Q4 totalling €500.6 million, down from €521 million. The decline in ad revenues was however a big improvement on the year-on-year performance in Q2, at the height of the pandemic, when revenues plummeted by 45% year-on-year.

TV viewing during Q4 averaged three hours and 42 minutes a day, up 37 minutes on the previous quarter. Digital-terrestrial channels accounted for 75.2% of viewing, with Telecinco, Antena 3 and La1 leading the way.