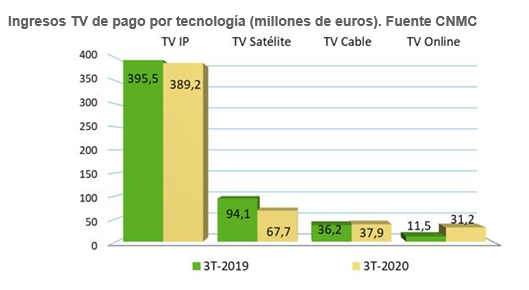 Pay TV revenues in Spain declined in the third quarter of last year, despite a rise in the number of subscribers, according to the latest data released by regulator the CNMC.

According to the watchdog, pay TV revenues declined by 2.1% year-on-year to €526.1 million. While IPTV and satellite TV revenues both fell, cable revenues rose slightly and online TV revenues nearly tripled, albeit from a small base.

Over the same period, total pay TV subscribers increased by 15.5% to around eight million, one million more than the prior year. IPTV remains the most used technology for distribution, with over 4.8 million subscribers, up from 4.65 million a year earlier.

Cable TV numbers rose slightly year-on-year, despite a dip from Q2 to Q3 this year, to and at just over 1.3 million. Satellite TV numbers continued to decline and stood at 477,000 at the end of the quarter, while online pay TV subscribers number 1.37 million at the end of Q3. 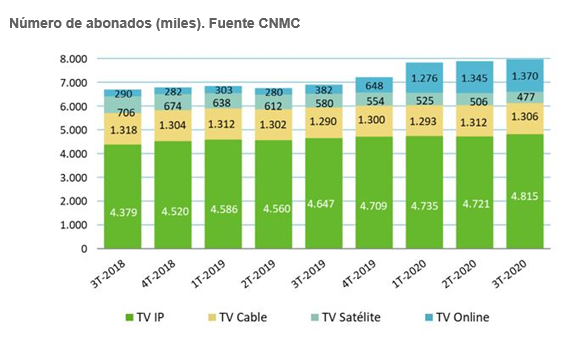 The CNMC also found that TV advertising revenues recovered in Q3 from the worst effects of the COVID-19 pandemic.

Ad revenues amounted to €390 million in Q3, up slightly year-on-year after plummeting by 45% in the second quarter.

Atresmedia was the biggest player with a 42% share of ad revenues, compared with a 39% share for rival Mediaset Espana.