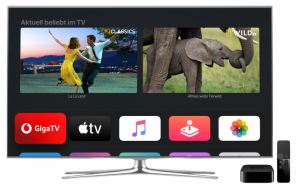 New and existing customers will receive Apple TV 4K on loan during their contract period directly from Vodafone.

Vodafone customers will also be able to use Apple’s single sign-on process on the iPhone, iPad or Apple TV, enabling them to get instant access to GigaTV content via all Apple devices.

As part of the Apple TV 4K offer, Vodafone customers can also use the Apple TV app to watch Apple TV+ and Apple TV channels as well as having the option of buying or renting content. They can use Apple Music, Apple Arcade, and other apps, including games, fitness, and education.

Vodafone customers will also benefit from free access to Apple TV+ for one year.

GigaTV offers up to 120 TV channels in SD and HD quality as well as access to the content of up to 69 on-demand catalogues via Apple TV. The bundle of premium entertainment equipment and TV entertainment costs €9.99 per month for the first six months of the 24-month contract period and then €19.99 a month. A one-time fee of €49.99 is charged for installation. A two-month trial of Vodafone Premium is included in the offer. The premium pay TV package, which can be reserved for €9.99 per month, includes 21 additional HD channels.

Andreas Laukenmann, managing director, residential customers at Vodafone, said: “By cooperating with Apple, we are combining maximum television enjoyment with the best streaming technology. With the duo of premium entertainment equipment and first-class TV entertainment, our customers receive another full-fledged TV solution for bringing television and the most popular streaming services to their home television via the Internet. Apple TV 4K complements our existing offerings and is a further step to offer our customers the most relevant and best content on all popular devices and platforms.”