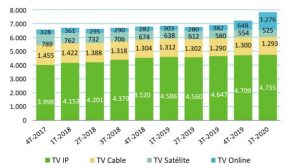 Online TV revenues, on the other hand rose from €12.4 million to €28 million year-on-year.

Spaniards watched an average of three hours and 51 minutes of TV a day in the first quarter, up by 20 minutes quarter-on-quarter and up by eight minutes year-on-year.