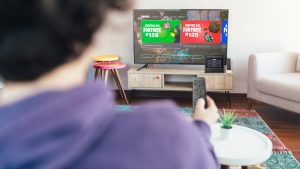 Telefónica has announced a partnership with Epic Games to bring the Fortnite Living app exclusively to its Movistar+ TV platform.

Videogame Fortnite first launched in 2017 and, since gaining significant investment from Tencent, has developed into one of the largest media properties in the world. The title arguably has become its own entertainment platform complete with concerts from the likes of Travis Scott and Anderson .Paak and screenings of films such as The Dark Knight and Inception within the game.

Focusing on that latter aspect of the game, the new Living App is available to Movistar Fusion customers in more than one million homes with a UHD Decoder. It will provide users with experiences and content from Fortnite, but no ability to actually play the game.

This content includes video series such as Myths About Fortnite, which is be presented by a pro gamer and already has more han 100 episodes. Fans will also be able to learn and improve their gaming skills through the ‘Committed Advice’ section where Spanish Twitch streamer Gladoop will “face with satire all the doubts, questions and curiosities that the users will send him through social media”.

There will be a number of other shows and sections presented by prominent Spanish-language Fortnite gamers, along with tutorials, tips, quizzes and news regarding the game.

Users can access the service via the apps section of their Movistar Home device, or by asking the voice control-enabled Movistar+ voice remote control.

This is the latest step in a partnership between the operator and the Tencent-backed Epic Games, following from an agreement started in June to facilitate in-game purchases via users’ Movistar bill – a move we have since seen internationally such as with 3 in the UK.