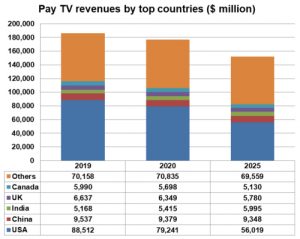 While the number of pay TV subscribers are continuing to rise, the segment’s global revenue will decline overall as operators look to stave off the competition from low-cost OTT services.

To put into context the dramatic downturn in fortunes since the emergence of OTT as a primary form of viewing for many, global pay TV revenuse fell by US$9 billion in both 2018 and 2019.

The report adds that the top five countries – the USA, China, India, the UK and Canada – which currently account for 62% of all pay TV revenues, will see their market shares dip to 54% as users in those regions increasingly cut the cord and ermerging countries grow in prominence.

India meanwhile, a nation which will always be prominent due to its massive population, is still emerging technologically and will continue to grow its pay TV base. The 1.3 billion strong country is expected to add US$0.8 billion in pay TV revenues.

The report was also optimistic about countries outside of the top five, adding that “there is still plenty of life left in pay TV.” It said that there will be an additional 34 million pay TV subscribers between 2019-25 to take the global total to 1.06 billion.