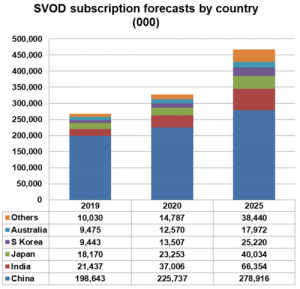 The Asia Pacific region will exceed 460 million SVOD subscribers by 2025.

According to Digital TV Research, the region will have 467 million SVOD subscriptions by the mid-point of the decade, up from 267 million in 2019.

China will continue to be the largest contributor, with 279 million subscribers, representing 60% of the total. India meanwhile will reach 66 million, tripling its 2019 amount.

Elsewhere, Japan will more than double its 18 million subscribers to reach 40 million, while South Korea will exceed 25 million and Australia will amass just shy of 18 million.

Of the 200 million added over five years, China will supply 80 million, Japan 22 million and India 45 million. China is expected to add 27 million SVOD subscribers in 2020 alone.

Simon Murray, principal analyst at Digital TV Research, said: “Although China dominates the region, there will be plenty of growth elsewhere. Netflix will have 44.4 million subscribers by 2025; closely followed by Disney+ [including Hotstar] with 43.6 million.”

While there are a large number of local players – particularly in China where the likes of Netflix and Amazon Prime Video are not permitted to operate – the continent is increasingly becoming a battleground for Western players.

Disney launched Disney+ in Indonesia last week and in Japan in June, with further rollouts promised for 2020 and beyond.

Netflix meanwhile has said that it will look to create more localised content for the Southeast Asian market and invest more in alternative payment methods for emerging markets where credit card penetration is low.