Amazon’s Twitch rolls out Watch Parties feature to all users 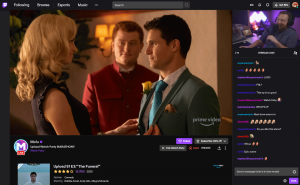 Initially launched in October 2019 only available via invite to select affiliates and partners, the feature has been extended to all creators on the site.

Of course, content is limited to the Prime Video library, but the draw for viewers is to watch content with their favourite streaming personalities and get their reactions.

Rather than other watch party plug-in features for the likes of Netflix and BBC’s iPlayer which are designed for viewing among friends, the main draw of the Twitch integration is to focus on the streamer’s personality and their reactions while also watching the film or show.

The news comes at a time when non-gaming content on the platform is regularly outperforming streams of games and esports events. The ‘Just Chatting’ category is a staple as the most-watched at any given time, with many online personalities using the platform as an extension of their other social media outlets. Other popular non-gaming categories include music and art, with a channel dedicated to the late cult favourite TV artist Bob Ross having more than 1.5 million followers.

The platform has also recently launched a sports channel with the backing of Real Madrid, Juventus and 2020 Champions League finalists Paris Saint-Germain.

Amazon is seeing increasing value in Twitch and its live streaming technologies, integrating it into its Music app and offering the tech to business customers via Amazon Interactive Video Service.