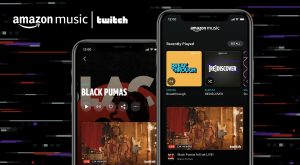 Amazon has continued to converge its offerings with the incorporation of Twitch’s live streaming tech into its Amazon Music app.

The music streamer, which has 55 million customers across a number of tiers, is in a hotly-contested market with heavy-hitting products from Spotify and Apple Music. Unlike in the video streaming world where subscription stacking is the norm, it is highly unlikely that a large number of users will subscribe to more than one service.

As such, Amazon is banking on increased engagement through the integration of live streaming video – a unique feature for the app.

The integration will allow artists to live stream performances directly to their followers through the service at a time when music fans around the world are unable to attend live gigs.

This absence of live music, due to the coronavirus pandemic, has seen music shoot up as one of the most popular categories on the primarily video game-focused Twitch – a trend which has likely informed this move.

In addition to live performances, the integration is envisioned as a marketing tool for artists who will be able to incorporate Q&As and other fan interactions around their release campaigns. So far, more than 1,000 artists including pop band The Killers have signed up to live stream within Amazon Music.

Viewers will be able to discover artist live streams within the Amazon Music app, including notifications from artists when they go live on Twitch and via a dedicated Live browse page within the app.

Ryan Redington, director of Amazon Music said: “The combination of live streaming, coupled with the on-demand playback of songs on Amazon Music is groundbreaking. We’re providing artists with more tools to instantly engage with fans, and this new feature couldn’t arrive at a more crucial time in the industry. Together with Twitch, we’re making it possible for artists across all genres, at all moments of their careers, to harness the social power of live streaming to create more engagement with their recorded catalog.”

Tracy Chan, VP, head of music at Twitch, said: “Twitch has always been about connecting amazingly talented creators live with fans everywhere. That’s why we’re excited to announce the next phase of our ongoing partnership with Amazon Music that unlocks an entirely new world of live music experiences and engagement by connecting Twitch live streams and Amazon’s catalog of recorded music.”

Twitch is increasingly growing central to Amazon’s digital video strategy, with the company recently launching Amazon Interactive Video Service using Twitch’s livestreaming tech. Amazon IVS uses the same technology that powers esports service Twitch, and promises a delay of just three seconds, much lower than the 20-30 second latencies common with other online streaming video services – vital for businesses which will have to stage events digitally for the foreseeable future.