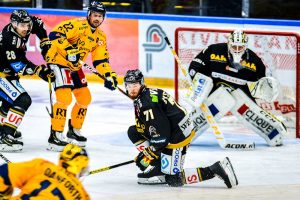 The Telia League Pass includes all League games across seven channels as well as one studio-based channel. Acable package is available for DNA’s cable homes, which also includes the UHD channel. The matches of the package can be watched via catch-up TV for seven days after they are played.

Cable subscribers have the choice of viewing the channels through a DNA Hub box or via a traditional cable TV set-top.

The Telia League Pass can also be ordered as part of the DNA SportMix package, with a range of options that can be varied on a monthly basis on top of a basic offering of seven channels.

“Hockey is a very popular TV sport in Finland, so naturally we want to keep the games of the main series of men’s domestic hockey as part of our offer. With DNA TV Hub, fans can watch all the matches they want, whether they are in front of a TV or at their summer home. In the DNA TV service, all entertainment is in one place, and it can be watched with one and the same subscription without any hassle, both at home and on mobile,” said Pekka Väisänen, DNA’s director of consumer business.