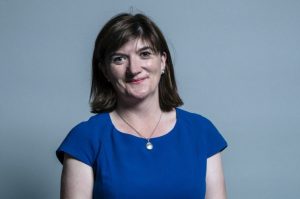 Nicky Morgan, the UK’s former culture secretary, is reportedly being considered as a replacement for outgoing BBC chair David Clementi.

According to a report in The Daily Telegraph, Morgan is a frontrunner for the role and is one of two candidates informally approached for the job which will be vacated when Clementi’s five-year term ends in February 2021.

Current culture secretary Oliver Dowden is said to be prioritising the candidate hunt following a return from holidaying.

Outside of Morgan, the government apparently also spoke with a senior executive from the tech sector who would appeal to its desire for an alternative to the licence fee.

The appointment is not a straight government hire though. While it will identify its preferred candidate, the BBC’s Royal Charter says that this can only come “following a fair and open competition” at which point the secretary of state must consult the BBC on the appointee.

At this point the job has not been advertised publicly and the BBC is reportedly still in the dark as to timings.

While an overtly conservative politician who was a member of the cabinet until earlier this year may ruffle some feathers, the Telegraph does point out that Morgan has a good history with incoming BBC director general Tim Davie due to the pair’s previous dealings during her time at the culture department.

The report adds that other political figures being considered are former home secretary Amber Rudd and Andrew Neil, the BBC presenter and chairman of right wing magazine The Spectator.