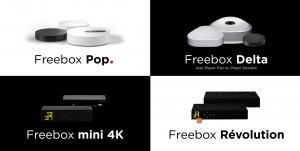 French service provider Free has launched the latest variant on its line-up of TV boxes, Freebox Pop, and has revamped its service line-up to “simplify” its overall proposition, while rival SFR has added Amazon Alexa voice control to the SFR Box 8 it launched a year ago.

The launch of Freebox Pop means that new users can choose between four boxes – the others being Freebox Delta, Freebox mini 4K and Freebox Révolution.

New subscribers that sign up for the heavyweight Freebox Delta can now choose between the Player Pop and the Player Devialet as part of their package.

The introductory price of this top-tier offering is being hiked from €39.99 for the first year to €49.99, with the Player Pop included alongside services Netflix, Amazon Prime and TV by Canal.

From August 22, subscribers will also be able to view without additional cost, the Free Ligue 1 Uber Eats offering, which provides near-live highlights of Ligue 1 football.

Existing Freebox Delta customers will see their internet speeds rise to 700Mbps, and will also have access to Free Ligue 1 Uber Eats.

Other new benefits for current customers include WPA3 security, a new WiFi Pop repeater free of charge, a multi-TV Player Pop option for 4.99 with 100 hours of recording time, and access to a new Freebox Connect app to control their Wifi.

A version of the Player Free Devialet compatible with Dolby Atmos will be made available soon.

Existing Freebox Révolution customers will receive an improved WiFi experience with WPA security and many of the other benefits outlined above, while users of the older Freebox Crystal will have access to Free Ligue 1 Uber East and the multi-TV Player Pop options

Not to be outdone, rival French service provider Altice France/SFR has added Amazon Alexa voice control to the WiFi 6-enabled SFR Box 8 it debuted a year ago.

The SFR Box 8 was claimed to be the first in the French market to integrate WiFi 6 technology and now comes with two voice control options – SFR’s own OK SFR voice assistant and Amazon Alexa.

OK SFR enables users to use voice to control TV and smart home appliances, including switching on and off the TV, searching for content, surfing channels and launching on-demand streams as well as controlling smart lighting and cameras enabled via the SFR Home service.

“The integration of the Amazon Alexa voice assistant at heart of the SFR Box 8 experience once more illustrates our desire to give choice to our customers and offer the best experience,” said Grégory Rabuel, CEO of SFR.

“We are delighted at the choice of Alexa to complete the service offered to users of the SFR Box 8 and to offer them an ever-more useful and personalised voice experience,” said Philippe Daly, Alexa country manager, France at Amazon.