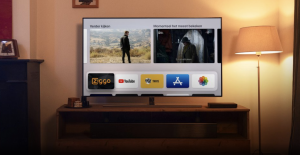 Liberty Global and Vodafone-owned Dutch service provider VodafoneZiggo has launched a new version of its Ziggo Go TV app designed with home use on second and third TVs in mind.

The app can be used on Apple, Android and Amazon Fire TV and can be downloaded from the relevant app stores as of yesterday.

The app is compatible with fourth generation and newer Apple TV boxes, with the Amazon Fire TV stick and on media players and smart TVs with integrated Android TV software from Sony and Philips, among others.

The service can be operated via the remote control of the media player or Smart TV. It supports voice control options from the various platforms, as well as search functinonality.

The version for homebound devices does not work internationally, and does not permit users to wa5tch shows offline.

Advanced VodafoneZiggo TV features such as Replay TV, Live TV, TV Guide, Watchlist and Movies & Series (XL) can be used within both variants of the app. Owners of the latest generation of Mediabox set-tops can also use the new ap to set recordings and access viewing profiles.

The current launch is seen as a test phase, and VodafoneZiggo said that changes may be made to it in the future.

Marcel de Groot, director. consumer market at VodafoneZiggo said: “Thanks to the expansion of Ziggo Go on these platforms, second and third screens will become an even more useful part of the household. With more than 1.5 million active users every month, Ziggo Go is compatible with YouTube and Netflix, and has been in the top three most downloaded and used video apps for several years. Thanks to this expansion on three different platforms, we are offering our services even more broadly, which, hand in hand with the familiar Ziggo functions such as Replay TV, TV Guide, and Movies & Series (XL), continues to grow the number of active and satisfied Ziggo users.”