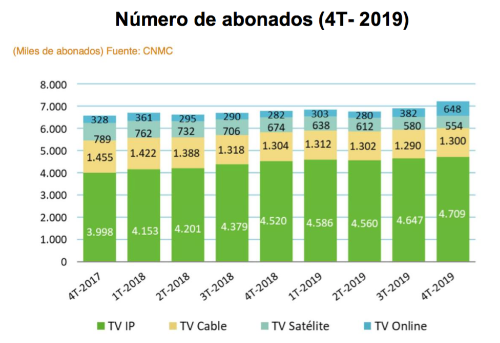 Spanish pay TV subscriber numbers passed the milestone of 7.2 million at the end of last year, according to the latest data released by regulator the CNMC.

According to the watchdog’s numbers, pay TV subscribers grew by 6.4% in the year to December, with 88% of pay TV customers taking a bundled offering from a service provider.

IPTV via ADSL or fibre was the leading technology for pay TV services with 4.7 million subscribers receiving TV services in this way, while cable accounted for 1.3 million. Satellite TV in the country continued its long decline, ending the year with 554,000 million users.

Private commercial broadcasters accounted for 87.6% of ad sales in the final quarter compared with 5.7% for public service broadcasting and 6.7% for pay TV. Mediaset and Atresmedia between them accounted for 81.7% of all ad revenues and 87.5% of free TV ad revenues.

Spaniards watched an average of three hours and 31 minutes of TV a day in the fourth quarter, up 29 minutes on Q3 but down eight minutes on the average for Q4 2018.

The CNMC said that average viewing time had spiked since the onset of the coronavirus crisis, with hours watched in March reaching an average of four hours and 44 minutes, 51 minutes up on Q1 2019.