Parks Associates: streaming devices and smart TV on the rise in US

Over 70% of US broadband households now own at least one streaming entertainment product and 50% own a smart TV, according to research by Parks Associates, published ahead of CES. 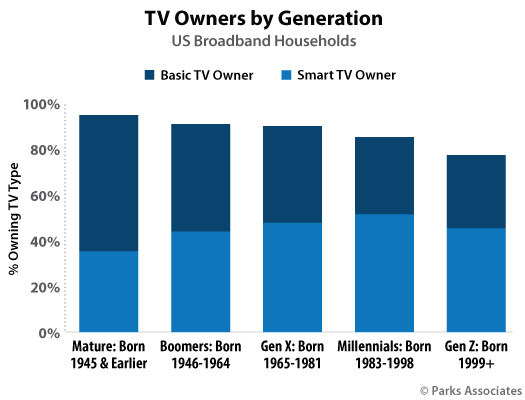 According to Parks Associates’ 360 Deep Dive, Demand and Perception of Connected TVs, 77% of smart TVs owned by US broadband households are now connected to the internet, an increase from 62% in 2014.

The report found that investment in apps and the smart TV user experience by manufacturers had helped drive higher connection rates, which it said will be of increasing importance in retaining younger consumers who may prefer to consume content on other devices.

The research, based on a survey of 10,000 US broadband households, found that smart TVs are the most commonly adopted streaming entertainment product type, and increasing adoption of OTT services has helped drive device purchases.

Other findings include the stat that 90% of US broadband households own at least one television, with 50% owning at least one smart TV and 40% owning basic televisions only. Some 56% of recent smart TV buyers purchased a TV with 4K video support, while only 33% owned a TV with this feature in the first quarter of 2019, according to Parks. The report also found that households with children purchase smart TVs at two times the rate of households without children.

“Manufacturers have invested in improvements to the app and user experience on their smart TVs and are being rewarded with higher connection rates, which keeps the user within their ecosystem. Higher connection rates result in greater opportunity in monetising the user base, which is increasingly important as manufacturers and software providers look to extend into subscriptions and ad-supported OTT video services, such as Samsung’s new ad-supported video service Samsung TV Plus. We will see a lot of announcements at CES this year focused on delivering a superior user experience to keep consumers in their ecosystem,” said Kristen Hanich, senior analyst, Parks Associates.

“Overall television ownership is beginning to decline, even as smart TV adoption grows. Millennials and Generation Z collectively represent the largest segment of TV buyers, but their unique demands on the TV are forcing manufacturers to rethink the role and form factor of the TV set.”