DTH satellite remains the most-used technology for subscription TV in Europe by revenue, but its prominence has declined since 2015, with cable now turning in less revenue than IPTV and DTT pay TV turning in less than OTT TV, according to research by Dataxis. 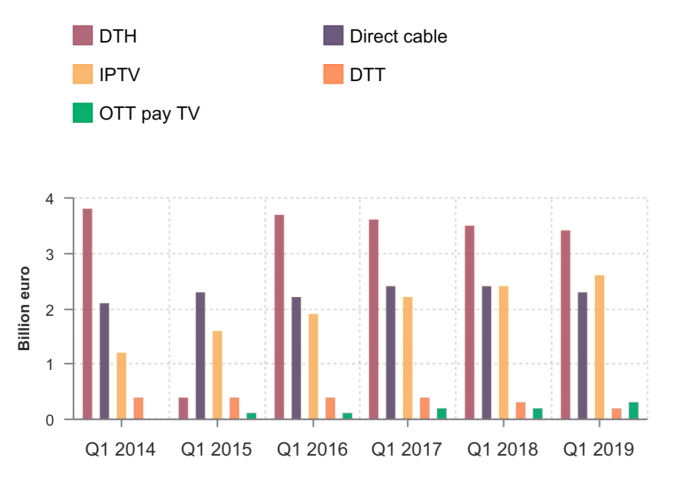 According to the research outfit, total total subscription revenues of the direct pay TV market increased by 19% in the five years between 2014 and 2019, reaching €8.9 billion in Q1 2019.

DTH remains the leading technology, revenue, still accounting for 39% of the total. However, its share has declined since 2015.

Direct cable revenues are stable and account for 26% of the total, according to Dataxis, but are now inferior to IPTV revenues, accounting for a 30% share.

DTT now represents only 2% of the total revenues and is declining, surpassed in Q1 2019 by OTT pay TV, with OTT revenues now representing 3% of the total. According to Dataxis, this confirms the growth and strategic importance of OTT in the pay TV market.