Some 12.3 million Australians subscribe to SVOD services, far outnumbering those with pay TV, with 43% of households now taking multiple services, up from 30% last year, according to research by local technology analyst outfit Telsyte. 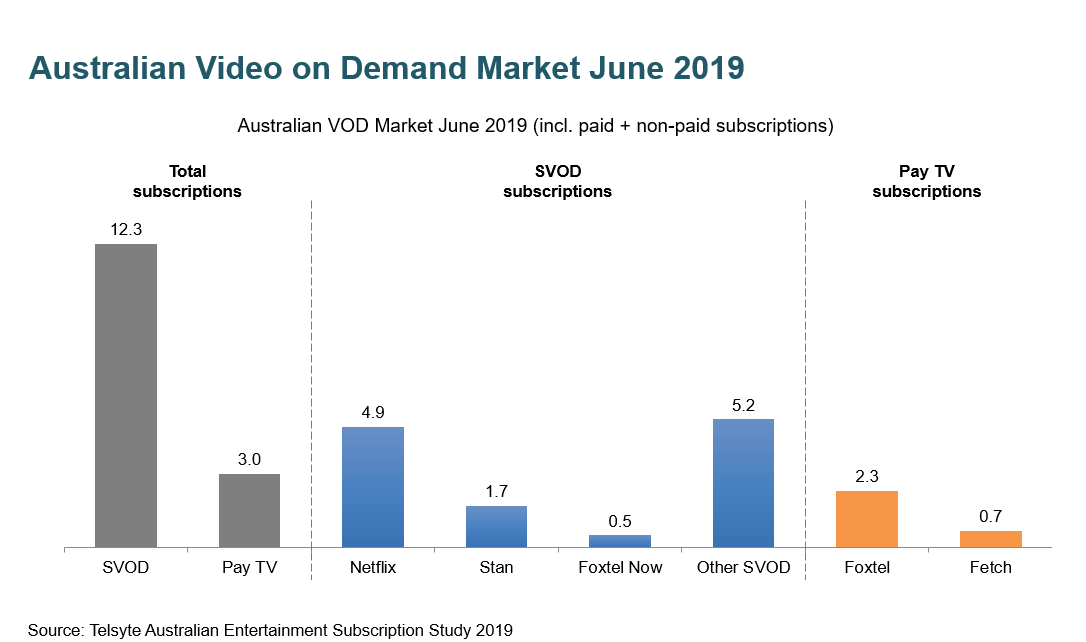 According to Telsyte’s the number of subscription video-on-demand customers has jumped 29% in one year, meaning that 55% of Australian households now take a service.

Telsyte’s Australian Entertainment Subscription Study 2019 found that Netflix remains the market leader with about 4.9 million subscriptions, followed by local competitor Stan with 1.7 million customers at the end of June this year.

According to Telsyte, the sports streaming category, excluding Foxtel Now, which provides a mix of sports and entertainment content, had around 4.4 million subscribers.at the end of June, up from 3.6 million for the prior year. Growth was driven by new services and telecom services bundles, according to Telsyte.

Telsyte found that the overall pay TV market had just over three million customers at the end of June, spanning cable, satellite and the Fetch TV IPTV service. According to the research outfit, pay TV leader Foxtel has seen its base come under pressure due to SVOD adoption, including churn from its pay TV base to its ownb streaming services Foxtel Now and Kayo Sport.

According to Telsyte, those willing to pay for subscription video services spend an average of A$30 for all video entertainment, while one in three have no set limit to the number of paid-for video service to which they would simultaneously subscribe.

Telsyte predicts that the country’s SVOD total could surpass 21 million by mid-2023, driven in part by new entrants. The analyst outfit found that one in four Australians, and 37% of existing SVOD customers, were interested in subscribing to the forthcoming Disney+ service.

“Subscriptions will be a critical way entertainment and technology brands connect with and monetise their customers,” said Telsyte managing director, Foad Fadaghi.