Asia Pacific video-on-demand subscriptions are set to climb from 221 million in 2018 to 407 million by 2024, according to Digital TV Research predictions. 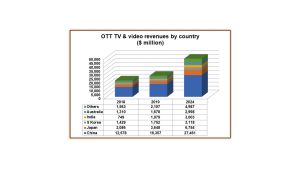 The research firm estimates that China will account for 289 million SVOD subscriptions in 2024, with India and Japan providing a further 31 million each.

“Three Chinese companies will top the Asia Pacific SVOD rankings by subscribers in 2024 – two of which will have more than 100 million subs,” according to the report.

Looking at the wider over-the-top video space in Asia Pacific, the Digital TV Research predicts that TV episode and movie revenues will jump from US$21 billion in 2018 to US$48 billion in 2024, increasing by US$5 billion in 2019 alone.

Advertising on VOD sites is expected to be the main source of OTT revenues in the region, with AVOD tipped to account for 52% of revenues by 2024 and SVOD for 39%.