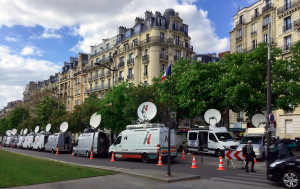 DMA Media, which launches and operates news, business and digital channels, said it planned a major expansion of Headline NFP’s news services across Europe and around the world. The Brussels-based company provides video and live facilities for BBC News, Euronews NBC and France Télévisions, among others.

DMA Media said that the deal means it can now provide specialist support and technical consultancy for its own news clients, as well as expanding the reach of Headline NFP in Europe and beyond. DMA Media is expected to open Headline studios in central London, Munich and Paris.

DMA Media’s Founder and Group CEO, Rob Beynon, said: “There’s nobody better at doing news than Headline NFP. They have the technology, the inventiveness and the facilities to keep the most demanding broadcasters in the middle of the Europe story, reliably and efficiently. I’ve known Headline NFP for many years, and its team of camera operators, editors, producers and engineers are world class – and they match DMA Media Group for unrivalled client service. We hope we can build on that reputation and extend Headline’s reach into new markets all over the world.”

Hans Deforce, Founder and CEO of Headline NFP, said: “This is a win-win for Headline NFP and the DMA Media Group. It means we can now use our expertise and resources for news broadcasters everywhere. The industry is changing very fast, and we will continue to strive to be ahead of things, as we have been for 20 years. With the extra resources of the DMA Media Group, we’ll be looking at a new era of expansion for Headline.”