Sports streaming service DAZN has launched a new feature called MultiView, allowing users to watch up to four live or on-demand events at the same time on one screen. 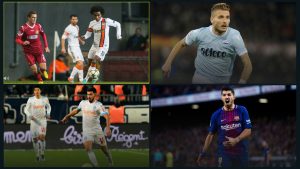 The new functionality is available on Apple TV devices and can be activated by long-pressing the Apple TV remote and selecting multiple videos to watch simultaneously.

MultiView is currently available on fourth and fifth generation Apple TV devices for all DAZN subscribers in the US, Canada, Japan, Italy, Germany, Austria and Switzerland, and will launch in future markets Spain and Brazil when the service goes live there.

DAZN Senior Product Manager, Richard Giannetti, who oversaw the project, said: “The new MultiView function will enhance the way fans watch sports. There are many concurrent live fixtures on the DAZN platform and giving fans the freedom to watch multiple events at once in an immersive way was a natural improvement for the product. We’re excited to constantly improve and create new viewing experiences for fans.”

DAZN announced in November that it would launch in Spain in early 2019 and in Brazil in March 2019, its ninth confirmed country launch.