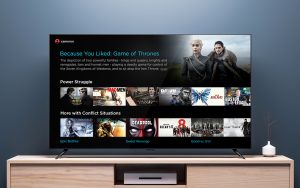 For example, Gracenote says that for Game of Thrones its system pinpoints themes like ‘greed’ and ‘betrayal’ and describes scenarios such as ‘power struggle’ and moods like ‘dark’ or ‘gripping’. This information can be used to identify similar shows based on related descriptors.

“Major streaming providers average around 40,000 TV episodes and movies in their catalogues but put the onus on their viewers to sort through and find relevant programming,” said Simon Adams, chief product officer at Gracenote.

“By diving deeper into storylines and characters and assigning much more granular metadata to content, Gracenote Video Descriptors give TV providers powerful datasets enabling fresher discovery, recommendation and voice experiences that satisfy the full spectrum of viewer tastes or moods.”

Gracenote generates its descriptive metadata using data scientists, editorial teams and machine learning technologies. Video Descriptors will be demoed CES in Las Vegas next week and more releases from Gracenote’s Advanced Discovery suite are due to be rolled out in 2019.