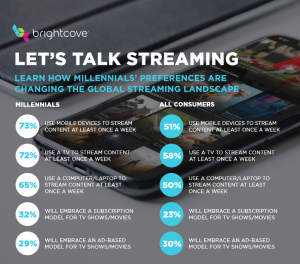 The video technology provider’s 2018 Global Consumer Streaming Habits Survey found that 68% of people aged 19-36 said that streaming services continually provide content they want to watch, compared to 55% who feel the same of broadcast networks and 53% about cable networks.

Millennials were also more likely than the general population to stream content on different devices. Some 72% were found to stream content at least once a week via a smart TV or external streaming device, 73% on a mobile device, and 65% on a computer or laptop. This compares to 58%, 51% and 50% respectively among respondents across all age groups.

Other millennial viewing traits picked up by the research included: 63% share their streaming logins with at least one other person, compared to 51% of all consumers; and 11% percent of millennials would embrace a subscription-based model to consume sports content versus 7% of the wider population.

“Across all generations, consuming online video is now an integral part of our daily entertainment routines,” said Brightcove’s chief marketing officer, Sara Larsen. “Today’s reality is every generation is consuming online video more than ever, so we want to ensure our customers have the knowledge and data needed to reach massive cross-generational audiences in a way that allows them to better connect with their viewers.”

The Brightcove survey was carried out by YouGov during September of this year. YouGov’s total sample size was 10,502 adults from the US, UK, France, Spain, Australia, Germany, Canada, and UAE and the figures were weighted so that it was representative of all adults aged 18 and over.