CCS: VR and AR device sales to drop in 2018 despite long-term promise

Sales of virtual and augmented reality headsets and glasses will decline year-on-year in 2018 before returning to growth in 2019, according to a new forecast by CCS Insight. 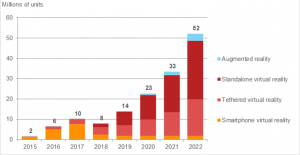 The research firm said that there is still “significant work” to be done to improve the user experience, software platforms and content availability of VR and AR, despite early enthusiasm for the technology.

CCS Insight expects that slightly less than 8 million AR and VR devices will be sold in 2018, down from 10 million in 2017. However, it projects sales will grow to 14 million in 2019 and reach 52 million in 2022, with the technology still holding significant long-term potential.

“We continue to believe that content is the key to unlocking adoption of VR,” said CCS Insight’s chief of research, Ben Wood. “Although some games companies and adult content creators have embraced VR technology, much more needs to happen to persuade consumers that VR devices are a must-have item.”

The research report notes that smartphone VR headsets sales have “collapsed” but claims that standalone devices like the Oculus Go hold great promise, as they overcome the inconvenience of being attached to a PC, smartphone or games console.

CCS Insight expects standalone devices to be “the key driver” of VR adoption in the next few years. Its forecast shows demand will grow more than 16-fold between 2018 and 2022 when 29 million standalone VR headsets are expected to be sold.

By comparison, it predicts five million tethered VR headsets will be sold in 2019, growing to 18 million in 2022, driven by dedicated gamers who want a ‘best-in-class’ experience. CCS doesn’t expect cumulative sales of AR devices to exceed one million worldwide before 2021.

“The first wave of [VR] consumers used basic cardboard viewers, which helped them understand the potential of the media, but the limited experience meant most people quickly lost interest. We don’t even include such devices in our forecast anymore,” said Wood. “We expect the next wave of adoption to come from dedicated devices that offer a more compelling, wire-free experience.”

Discussing AR he added: “We are seeing a rising number of companies committing to deployments of tens or hundreds of augmented reality glasses as they start to see the clear benefits of head-worn technology in the workplace. Despite this gathering momentum we still think it will take time for the AR device market to grow.”