The BBC has confirmed it is experimenting with “different ways to reach audiences in different markets” after launching an SVOD offering via Amazon Prime Video Channels in Germany and Austria last week. 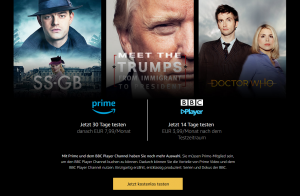 BBC Player launched for the first time in Germany and Austria on November 15, with the €3.99 per-month subscription service available exclusively to Amazon Prime subscribers.

A spokesperson the BBC’s commercial arm, BBC Studios, said that BBC Player will offer archive content its distribution catalogue – including titles like as SS-GB, DCI Banks, David Beckham: Into the Unknown,Galapagos, and Meet the Trumps.

BBC Player will also feature series one to four of Doctor Who and series 22 to 24 of Top Gear, with content available both dubbed into German and in its original English.

“BBC Player, which is available in Singapore and Malaysia through Starhub and Hypp TV respectively, is a suite of on demand channels that are curated and managed by BBC Studios,” said the BBC Studios representative.

“The BBC Player offering in Germany, however, is a branded SVOD package through our partner Amazon that features periodically refreshed archive content and complements our programming that German audiences can view on a number of local channels.”

While the launch marks the first rollout of the BBC Player brand outside of Asia, the BBC said it was not indicative of a wider SVOD expansion strategy as such – it is just one of its experiments in reaching audiences in different markets.

In Asia, BBC Player is an authenticated SVOD service that offers curated content from brands like BBC Earth, BBC First, BBC Lifestyle, CBeebies and BBC World News. It debuted in Singapore in 2016 and launched in Malaysia in 2017.

The BBC’s commercial arm has previously tested a global version of its iPlayer catch-up service – though BBC Studios boss Tim Davie announced in 2013 that it would phase this out as part of his future vision for the business. The service was closed permanently in June 2015.

The BBC launched its standalone Global iPlayer app as a subscription service in 2011. The iOS app reached a million downloads a year later and by 2013 was live in 16 markets in Western Europe, Canada and Australia.