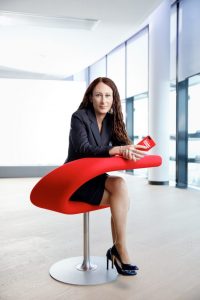 Vodafone Deutschland has named Anna Dimitrova as its new chief financial officer. Dimitrova, who previously worked for Vodafone in a number of roles spanning consumer, enterprise and finance, will replace Andreas Siemen, who is leaving the company. She will take up her new position on November 1.

Dimitrova, a Bulgarian national, began her career with Vodafone in 2001. She served as chief financial officer of Vodafone Czech Republic from 2012 to 2014 before returning to Germany as head of strategy, where she worked on the integration of Vodafone and Kabel Deutschland and the positioning of Vodafone Deutschland as a high-speed broadband provider.

As CFO, she will continue to be responsible for the company’s strategy, tasked with overseeing the further digitization of the company, the creation of a unified Gigabit network via the planned merger with Unitymedia and the development of new business areas in the enterprise, Internet of Things and 5G areas.

Hannes Ametsreiter, CEO of Vodafone Deutschland, said that Dimitrova’s appointment – the first of a woman to the CFO role in the company’s history – was a sign of its commitment to advancing women to senior management roles. He said that Dimitrova would bring the benefit of her international experience, with fresh ideas to contribute to Vodafone’s success.

Dimitrova’s appointment comes as Vodafone moves towards its acquisition of Unitymedia from Liberty Global, a deal that is attracting strong opposition from the company’s competitors. Two weeks ago Markus Haas, the CEO of the country’s third-placed mobile operator, Telefonica Deutschland, added his voice to those opposing the deal. Haas called for the acquisition to be blocked on competition grounds, arguing that it would damage competition in the cable and fixed broadband markets.