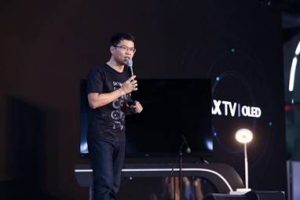 At the event, Yu Jianwei, China marketing headquarters executive vice-general manager and marketing director at Skyworth showcased the new TV and controlled it solely by voice. He switched the TV on and adjusted a nearby table lamp via voice command.

Skyworth says that its AI TV will ‘wake-up’ in response to a voice command and respond to commands to adjust the volume or answer a general question.

In March this year, Skyworth entered into a strategic partnership with internet technology giant Baidu to integrate the latter’s DuerOS and Coocaa System in its devices. The Coocaa System provides an optimized media resource library, while DuerOS transforms the TV into an intelligent display that provides users with more accurate search content and an elevated user experience, according to Skyworth

Skyworth has also joined forces with voice and audio processors specialist XMOS to develop the AI voice chip for its TVs. XMOS’s first generation microcontroller has been used in consumer, studio and broadcast audio equipment from over 200 manufacturers, while its second-generation multicore microcontroller, the xCORE-200 series, is designed for IoT-based equipment for the creation of high-quality music and optimised sound processing solutions.

The AI TV voice chip is based on XMOS VocalFusion XVF3500 voice processor, with a compact four-microphone linear array to enhance voice capture range and accuracy. Skyworth says that it and XMOS have developed a solution that enables Skyworth’s TV to deliver 180° all-dimensional sound-source identification from up to five meters. The XVF3500 voice processor also supports de-reverberation and noise suppression, enabling the Skyworth TV to ‘hear’ and accurately capture the user’s voice commands, no matter what volume the content is playing at or how noisy the surrounding environment, according to the company.