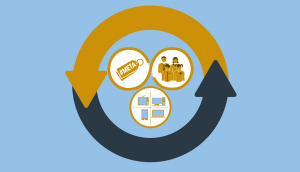 From this week, BARB claims it is producing daily viewing figures that break down the number of people watching television programmes on four screens: TV sets, tablets, PCs and smartphones.

To do this, BARB is now combining census-level data from software that’s embedded in broadcaster operated video-on-demand services like the BBC iPlayer and ITV Hub with cross-device panel data from its nationally representative panel of 5,300 homes.

The census-level data measures viewing data across tablets, PCs and smartphones. However, in addition to BARB’s traditional TV meters, the panel data only uses meters that are installed and track viewing on PCs and tablets – not smartphones.

The move marks the second stage of Project Dovetail. Stage one was collecting the census data for online TV viewing on the TV player apps, which BARB has been doing since 2015.

This week’s stage two rollout kicks off the combination of this census data with BARB’s panel data, which will in effect allow BARB to report the extent to which tablets and PCs increase the number of viewers and average weekly viewing time for BARB-reported channels.

The third and final stage of Project Dovetail aims to analyse multiple-screen advertising campaign performance. This is currently in development, with the delivery timetable yet to be finalised.

“Today we reach another milestone in the delivery of Project Dovetail, which is designed to meet industry expectations for a trusted cross-platform audience currency,” said BARB CEO Justin Sampson.

“This is an ambitious project, as there are many challenges in delivering multiple-screen audience figures to the rigorous standards expected of a joint industry currency such as BARB.”

“Three critical ingredients enable us to extend our gold standard to cover viewing on tablets, PCs and smartphones. We have representative, observational [panel] data that show how people watch on different devices. We also have an independently-collected, census-level count of viewing to BVOD [broadcaster VOD] services. And we have smart algorithms that fuel the day-to-day integration of these two high-quality, complementary data sources.”