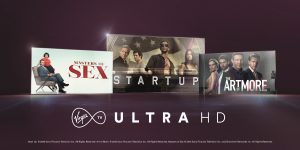 Virgin TV Ultra HD is due to start broadcasting on September 17 and will air: drama series like Start Up, Masters of Sex and House of Cards; wildlife and nature documentaries such as Love Nature’s The Big Dry; and concert footage from acts like the Rolling Stones and Sting.

“From epic dramas and stunning documentaries to the front row feeling of a rock concert, our customers will get closer to the action than ever before – with four times the picture quality of HD. It really is the next best thing to being there.

“We’ve shown some of this year’s biggest sporting events in Ultra HD, such as the Champions League and Wimbledon finals and we’re now giving entertainment the Ultra HD treatment. It’s all part of our ongoing investment to give our customers the best way to watch the best TV.”

Virgin TV Ultra HD will be available at no extra cost to Virgin TV Full House and VIP customers with a V6 set-top box. It will broadcast on channel number 999 from prime-time in the evening until late each night and will kick off at 8.20pm on its launch day.