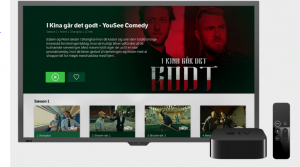 Danish cable and telecom operator TDC is to make its YouSee TV service available via an Apple TV app as well as its own set-top boxes, and will follow up with the launch of an app for LG smart TVs.

Jacob Mortensen, managing director of YouSee, said that the operator’s customers “should be able to watch TV as it best suits them, and we have experienced high demand for Apple TV”.

Mortensen said that YouSee would follow up the Apple TV launch with an LG smart TV launch later this month.

The latest moves by YouSee to cater to the burgeoning demand for bring-your-own-device viewing follows launches last year on Android TV and earlier this year on the most widely deployed smart TV platform, that of Samsung.

The YouSee TV & Film app is available from the Apple App Store for Apple TV. Users can log in with their normal YouSee credentials. The complete package is available via the app with the exception of transactional VOD movies and DVR, neither of which are available yet.

Separately, TDC is to add YouTube to its YouSee TV service with a dedicated channel slot among traditional linear channels.

Mortensen said that the move means that users of the latest generation of YouSee set-top boxes will be able to “zip directly from DR or TV2 to YouTube”. Mortensen said that for many Danes, especially of the younger generation, TV and streaming now “go hand in hand and enrich each other”. He said that YouSee’s goal was to “aggregate the content demanded by our customers and make as easily accessible as possible – and we are therefore working on adapting ourselves to the changing habits of Danes”.

The integrated YouTube will be available initially to the 40,000 YouSee customers using the operator’s latest Humax TV box, which it rolled out in January. Users can also access YouTube premium services via the set-top, but need to sign up for these separately online.

The operator said it would increase the price of the Bland Selv basic package by DKK10 on January 1, with the Faste package to increase by DKK20 (€2.70 and the Fuldpakken by DKK25.