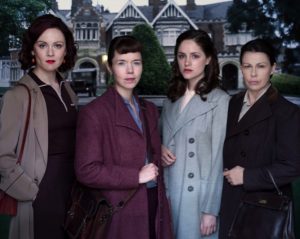 Epic Drama will feature series including The Bletchley Circle

Joining the Czech and Slovak pay TV service will significantly extend Epic Drama’s reach in the two markets. Skylink is the biggest DTH platform in the Czech Republic and Slovakia, and has carried Viasat World’s flagship factual channels since 2007, the first pay TV documentary channels on the platform.

Epic Drama HD will be available in the Smart Basic pay TV tier on Skylink, alongside Viasat Explore, Viasat History and Viasat Nature – the carriage of which the deal also renews. An Epic Drama SVOD service will also launch via Skylink at a date to be confirmed.

Tamas Horvath, commercial director at Viasat World, said: “We are delighted that M7 Group is adding our brand-new content brand Epic Drama to Skylink – testament to our commitment to understanding our clients’ needs and our shared goal of delivering relevant content to audiences. Epic Drama’s differentiated proposition sets it apart from the crowd – giving people access to world-class, acclaimed drama content 24/7 when and where they want it. Its success to date is attributable to our agility to respond to what viewers and partners are looking for as an independent broadcaster, alongside our ambition to grow our reach and audience.”

Jaromír Glisník at M7 Group, said: “With so much content out there, there is still demand for quality series channels which expertly curate the very best of what is on offer. Viasat World’s pedigree in content curation speaks volumes; its high performing documentary channels which aggregate top quality content really resonate with our customers, so we are thrilled they will now also receive Epic Drama which is proving to be a real hit with audiences.”

The channel and SVOD service extended its reach across central and eastern Europe in June with launches on Liberty Global’s platforms in Poland, Romania and Hungary.