Jeffrey Katzenberg and Meg Whitman’s NewTV venture has closed an initial funding round that saw it raise US$1 billion from major studios, Liberty Global and Chinese technology group Alibaba among others. 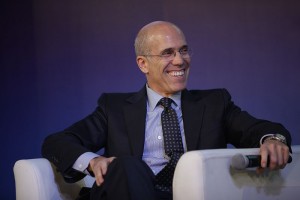 Strategic partner investors who contributed to the funding round include Liberty Global as well as Goldman Sachs, JP Morgan Chase and Madrone Capital, which led the round.

NewTV was set up to build a new entertainment platform designed for on-the-go mobile viewing.

The announcement follows earlier reports from Bloomberg and CNN that former DreamWorks Animation chief Katzenberg had raised funding for the venture.

“More so than ever, people want easy access to the highest quality entertainment that fits perfectly into their busy, on-the-go lifestyles. With NewTV, we’ll give consumers a user-friendly platform, built for mobile, that delivers the best stories, created by the world’s top talent, allowing users to make the most of every moment of their day,” said Whitman, who is acting as CEO of NewTV.

“It is exciting to see Hollywood embracing this new technology distribution platform built for the way we watch today. NewTV will access the best talent and intellectual property for this next era in entertainment.  We are already seeing tremendous interest from Hollywood’s top talent,” said Katzenberg, managing partner of WndrCo and chairman and founder of NewTV.

Julian Bellamy, managing director, ITV Studios, said of his company’s investment in the venture: “Global demand for high quality entertainment continues to grow. Being part of the start of this exciting new mobile platform offers ITV’s hugely talented and creative people around the world the opportunity to produce content in a way never seen before. This investment is consistent with our ‘More than TV’ strategy and the focus on growing UK and Global production. We look forward to working with Jeffrey, Meg and the team.”