Twitter signed 50 new video deals in Q2, including with major companies like ESPN, NBCUniversal and Viacom, as it also continued to improve the video experience on the service. 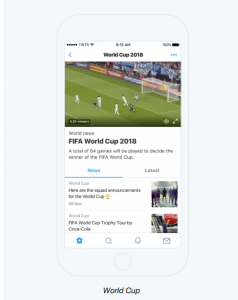 The social network agreed 50 new live-streaming, highlight, Amplify, and video-on-demand agreements in the same quarter that it launched a “scalable new event infrastructure” to make it easier for people to follow events, topics and interests.

Twitter used this infrastructure during the FIFA World Cup and partnered with Fox to show goal highlights in the US in near real-time, hailing this as an important example of a partnership designed to deliver breaking news and contribute to the conversation on the platform.

The company said that Tweets, top commentary, and live video, and are now more accessible across the service, including in search results and the Explore tab. It also expanded ‘Happening Now’ beyond sports to include Tweets and videos about breaking news at the top of people’s timelines.

Speaking on the company’s earnings call, CEO Jack Dorsey said that video has “always been a great conversation piece” and continues to “enrich the conversation,” claiming that this is something the company is heavily building on.

“We’re always looking for opportunities to match conversations already happening on Twitter with really great video content, whether it be live or pre-recorded and we see more and more of those all the time,” said Dorsey.

“Now that we do have a generalised event infrastructure that we’ve tested at scale with the World Cup allows us to move much faster and deploy those videos and match that with a conversation in a much more relevant and faster way.

“We’re excited about where we are today with video, but there’s a lot more ahead of us that we’re excited to do to help people get more into the video and get more out of the conversation.”

Twitter’s total advertising revenue was US$601 million in Q2, an increase of 23% year-on- year or 21% on a constant currency basis. Adjusted EBITDA for Q2 was US$265 million, or 37% of total revenue.

The company’s GAAP net income was US$100 million, with a US$42 million income boost coming from a tax benefit. In the same quarter last year Twitter reported a GAAP net loss of US$116 million.