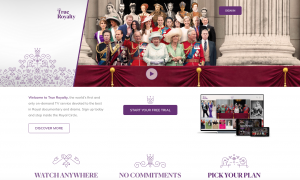 Following on from the global popularity of Prince Harry and Meghan Markle’s recent wedding, a new on-demand TV service has launched this week that will consist entirely of royal-themed content. Called TrueRoyalty.tv, it offers subscribers a mix of documentaries and factual dramas about Royalty from around the world and through the ages, chosen by BAFTA award-winning producer Nick Bullen.

True Royalty will enables subscriber to watch almost 90 years’ worth of “the world’s best Royal programming”, across a range of devices. Highlights at launch include home movie footage of Royals at play; interviews with senior Royals across the generations; lost archive gems and programmes that have never before been shown outside their original broadcast territory. Launch titles include Prince Philip at 90, Meghan Markle: How To Be A Royal, The Last Dukes and The Duke and Duchess of Windsor: The Secret Photos of their Love Story.

True Royalty was formed by media entrepreneur Gregor Angus, brand strategist Edward Mason and BAFTA award-winning royal producer Nick Bullen – who is also CEO of Spun Gold TV. Commenting on the new service, which will initially be available in the UK, Ireland, USA, Canada, Australia and New Zealand, Bullen said, “People have always been obsessed with Royalty – from the Pharaohs to medieval kings right up to today’s newest royal Meghan Markle. True Royalty is a chance to share the best stories with viewers across the globe.”