Gummersbach-based Reichle & De-Massari GmbH will use ANGA COM to showcase the creation of a POP station with the new optical distributor ODF Prime. 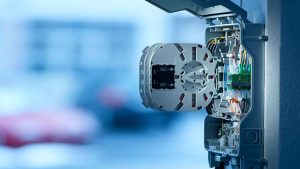 The Prime can accommodate up to 5,376 fibres and offers the highest packing density to date in this segment, according to the company.

R&M is also presenting application examples with multi-functional housings which can be used as mini POPs, as well as housing system solutions for splitters.

The company will also show its fibre optic Field 2.0 field-terminable fibre-optic connector. The company claims that installers can wire fibre optic cables in buildings and distribution sites with the fibre optic field in under a minute, thanks to an innovative clamping device that fixes both the cables as well as the actual core inside.

The field-mountable connector can accommodate all standard FIBRE OPTIC cables, including butterfly cables, the company says.

R&M will also show its Polaris-box 6, described as a configurable platform for fibre optic distributors and terminations on FTTH customer premises. Locations for use range from the building entry point on the facade or in the basement through floor distributors to power outlets in offices and apartments.

Up to 12 plug and 60 splice connections as well as two trays for PLC splitters can be accommodated in the dust- and waterproof housing, according to the company. Network operators can set up both point to point and point to multipoint infrastructures with the Polaris-box 6.

R&M is also showing its SYNO Dome Closure as a solution for subterranean fibre-optic distribution. This includes what the company describes as a new quick mounting technology and innovative gel seal.

A modular system for cable entries does away with cable threading and at the same time takes on the function of sealing, while the variable cable entry kits support multiple configurations and mixed assemblies, according to R&M. The range encompasses seven cable entry kits for up to 16 cables. Cables up to 28mm and micro ducts up to 14mm in diameter fit in the kits. The splice closure can be used as a distribution, branch, or cable joint closure.

R&M is also demonstrating its micro data centre telco edge. This makes it possible for network operators to create additional computing performance at the edge of the broadband networks. Central offices, hubs, POPs and head-ends are suitable locations.

R&M says this meets the needs of growing data traffic that requires more than just the massive expansion of fibre-optic networks. Suppliers of cloud computing, of services related to the Internet of Things and of video and streaming channels must also outsource capacities to the edge, the company says, to process large quantities of data faster and closer to the consumers as well as shorten transmission paths and latency times.

R&M will be exhibiting at ANGA COM on stand 7.G30