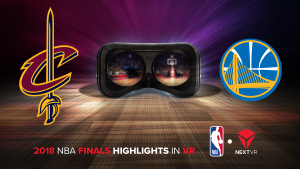 Fans will be able to access highlights from the NBA Finals channel within the NextVR app the day after each game of the basketball finals.

NextVR said that a new high-resolution format will deliver increased resolution and sharpness this year to all head-mounted VR displays, with higher-end headsets – like the HTC VIVE Pro and Samsung Odyssey – to see the most dramatic impact.

“While all users will see an immediate improvement, this only scratches the surface of the capabilities of this format and our technology platform. More advanced headsets slated to ship in the future will take even greater advantage of this new VR broadcast technology.”

The seven games of the NBA Finals between the Golden State Warriors and the Cleveland Cavaliers are due to conclude on June 18. Fans can download the free NextVR app and access it from Oculus Go, PlayStation VR, HTC VIVE Pro, HTC VIVE, Windows Mixed Reality, Gear VR, and Google Daydream devices.