Penetration of IPTV in France equaled that of terrestrial TV for the first time in the fourth quarter of last year, according to statistics provided by media regulator the CSA. 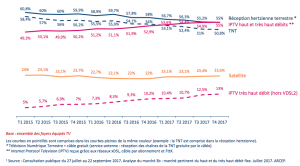 The CSA said that IPTV was on the way to become the main mode of receiving TV for all TVs in French homes, a status it already enjoys for the principal TV in the home, with 52.2% using IPTV for their main set.

Some 65% of French homes have a TV that can be connected to the internet, with the majority connected, according to the CSA. About a quarter of these are connected directly, with 64% being connected by a box controlled by an ISP. Just over 9% of connected TVs are hooked up to a third-party box, and 28% are connected via a game console.