Kagan: Vodafone will look to quad-play in CEE, may sell off DTH

Vodafone is likely to introduce quad-play offerings and may sell off its newly-acquired DTH satellite services in central and eastern Europe, according to S&P Kagan.

According to the analyst group, Vodafone may view the introduction of quad-play offerings as advantage in what are competitive and fairly saturated markets in the region.

Vodafone’s deal with Liberty Global last week saw it acquire the latter’s operations in Germany, Romania, Hungary and the Czech Republic for €18.4 billion.

According to Kagan, Vodafone’s existing mobile operations in the Czech Republic, Hungary and Romania, serving 15.8 million mobile customers in the three markets, will be supplemented by the acquisition of 6.4 million fixed-line homes passed, 1.8 million broadband subscribers and 2.9 million TV customers, enabling it to take advantage of synergies in cross-selling services to the combined base. 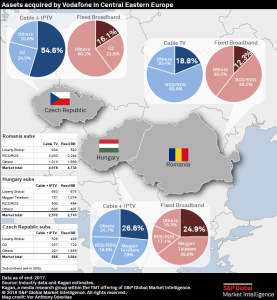 Kagan said it is “quite likely” that Vodavone will opt to divest the former UPC Czech Republic, Hungary and Romania DTH operations, which served a total of 732,400 subs as of year-end 2017 and sell them to local players.

The analyst group suggested that recent entrants Freesat and Orange Romania could be potential buyers for the Romanian DTH business. In the Czech Republic, despite the entry of new DTH players Flix TV and Antik Sat, it says that the most likely buyer could be Romania’s RCS&RDS, which operates across all three countries.

Kagan argues that growth across all three markets can only really come from bundling fixed and mobile offerings, with growth in fixed tailing off.

UPC Hungary lost pay TV subscribers overall in 2017, following years of DTH losses. While the cable TV base grew only by 7.7% over five, years, Magyar Telekom, which also offers mobile services, managed to fgrow its cable and IPTV base by 38% over the same period.

In Romania, RCS&RDS, which again also runs a mobile business, grew its cable base by 32% over the last five years, while UPC Romania only grew its base by 9.6%.

In the Czech Republic, a similar story saw O2 Czech Republic, which has five million mobile customers, grow its IPTV base by 69%. Over the same period, according to Kagan, UPC Czech Republic lost DTH customers and saw its cable TV base grow by only 9.4%.