SVOD accounted for majority of pay video growth in 2016

Subscription video-on-demand services in Europe accounted for 60% of the growth in pay video services in 2016, but SVOD still accounted for only 7% of pay services revenues in the same period, according to research by the European Audiovisual Observatory. 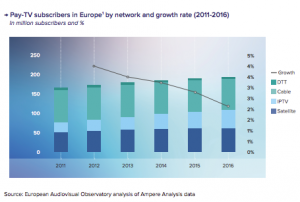 According to the Observatory’s latest Key Trends publication, pay TV revenues increased by 2.8% in Europe in 2016, the lowest growth rate since 2012. IPTV outperformed cable, digital-terrestrial and satellite TV, delivering 8.8% growth. Satellite TV homes fell by 0.2% during the same period, while cable and DTT recorded small increases.

The report found that pay services overall grew by 4.3% in 2016, in line with the overall growth of the market since 2011.

The transactional video-on-demand market meanwhile has failed to compensate for a decline in the physical video market. Both combined declined by 6.3% a year between 2011-16, according to the Audiovisual Observatory.