Ampere: Binge viewing more common in the US than Europe

Binge viewing is more common in the US than in Europe but is rapidly becoming “standard practice” in both markets, according to Ampere Analysis. 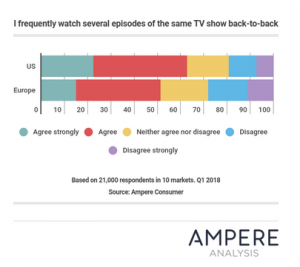 The research firm found the proportion of internet users who ‘strongly agree’ they frequently watch several episodes of the same TV show back-to-back is 22% in the US and 15% in Europe.

Overall, 63% of people polled in the US agreed they frequently binge, compared to 51% in Europe.

In terms of viewing habits by device, Ampere found that in the first quarter of 2018 some 26% of US internet users watched video on their smartphone daily, compared to 19% in Europe. However, in both markets this proportion was down over a six-month period.

US internet users were also found to be more likely to watch online video on a smart TV than their European counterparts, with 39% doing so on a daily basis compared to 26% in Europe.

The data is based on survey of 21,000 respondents carried out across 10 markets in the first quarter of this year.