Stranger Things topped Parrot Analytics’s analysis of ‘in-demand’ digital originals in Sweden for the week ending January 28, with the popular sci-fi horror show achieving close to double the number of ‘demand expressions’ measured by Parrot of its closest rival, Amazon’s The Grand Tour. 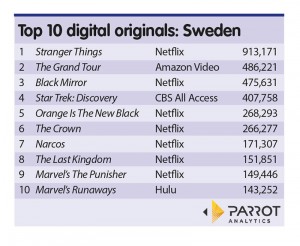 Stranger Things has been the clear leader in Parrot’s table for DTVE for the past several months, topping the charts of digital originals in France, Italy, Spain, Denmark, the UAE, South Africa and Hungary.

The other titles in the list for Sweden for the week from January 22-28 are CBS All Access’s Star Trek: Discovery, carried by Netflix internationally, Netflix’s Orange is the New Black, The Crown, Narcos, The Last Kingdom and Marvel’s The Punisher, and Hulu’s Marvel’s Runaways, which is carried by HBO Nordic.