De Posch stepping down at RTL, Habets to be sole CEO 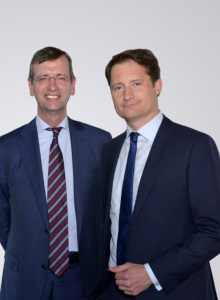 Guillaume de Posch is stepping down from his role as co-CEO of RTL Group, leaving Bert Habets as the pan-European broadcast group’s sole chief executive.

De Posch, who will step down on January 1, will continue to serve as a non-executive member of RTL Group’s Board of Directors.

Habets, who was only appointed as co-CEO in April replacing Anke Schäferkordt, will now lead the group as sole CEO, with overall responsibility for strategy and day-to-day management.

Habets was previously CEO of Dutch arm RTL Nederland, where he was credited with transforming the company from a traditional broadcaster into an all-round media and entertainment company.

“On behalf of the whole Board, I would like to express a big thank you to Guillaume de Posch for his leadership at the helm of RTL Group since 2012. He has been key to transforming RTL Group into the most digital European broadcasting company, and to re-invigorating FremantleMedia’s creative drive. High-end drama productions such as The Young Pope and American Gods stand testimony to this achievement. I regret, but fully respect his decision, and I’m delighted he will continue to contribute his expertise across broadcast, content and digital as a non-executive director on our Board,” said RTL Group chairman Thomas Rabe.

“With Bert Habets, RTL Group will be led by a digitally savvy media entrepreneur with an exceptional in-house career development at RTL Group. He will ensure long-term continuity in the Group’s leadership, and accelerate the execution of its ‘Total Video’ strategy. This strategy includes a strong focus on fostering creativity and building more direct-to-consumer businesses in the video-on-demand domain. I look forward to continuing our close collaboration, and wish him – as well as Elmar Heggen – every success in their positions.”

De Posch meanwhile said that he was “very much looking forward to becoming a non-executive director of this inspiring company.”

RTL last month reported solid Q3 results on the back of a strong performance by its core German broadcast business. Group revenue was up 1.5% to €1.372 billion, due to higher revenue from Mediengruppe RTL Deutschland and Groupe M6. EBITDA however jumped by 17.4% to €263 million, with EBITDA from the German unit rising by 23.9% and M6 EBITDA jumping by 36.5%.

The company is investing significantly in digital initiatives, including addressable advertising, where it is combining its SpotX and Smartclip units into a single integrated ad-tech company by the end of this year.