Desire for à la carte skinny bundles fuelled by frustration at the amount they are forced to pay remains the number one factor that would convince North American pay TV subscribers to stay with their provider, while a growing number are also interested in gaining access to third-party services on top of their offering, according to TiVo’s latest quarterly Online Video and Pay TV Trends report.

Some 58.4% said that the availability of skinny bundles or à la carte options would convince them to stay with their current pay TV provider. A growing number of pay TV customers – 42.5% – would also be tempted to stay if content from all service providers including OTT providers was combined in one place. 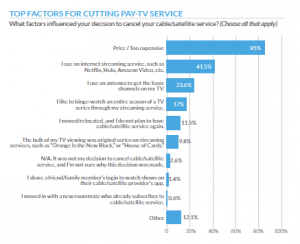 The number of US homes cutting their cable service fell for the first time since Q3 2016, while the amount paid for TV services rose slightly according to TiVo’s report.

According to the report, 20.2% of those without a pay TV service had cut their service in the last 12 months. However Q3 saw the slowest growth in this number for a year.

Some 45.9% of non-pay TV users watched over-the-air TV, a number that is not growing significantly.

Eighty-five per cent of those cancelling their service cited price as the key reason, followed by a preference for a streaming service such as Netflix or Hulu, cited by 41.5%. Some 23.6%$ said they cancelled because they used an aerial to watch over-the-air TV.

In some respects, pay TV users’ satisfaction is growing. Some 60% said they had time in a given week to watch all their favourite shows, a growing proportion, while the number using a DVR to watch shows declined by 6.3 points.

Some 70% said it was easy to find something to watch. However, 22% with a pay TV service said they would prefer a more up-to-date carousel-type user interface than the traditional grid, with 35% saying they would like the option of accessing their current grid in a carousel format.

TiVo found that awareness of content recommendation was growing, but that those reporting their provider did not offer such a service had grown slightly. Satisfaction with recommendations is growing slightly, with 25.1% reporting them to be ‘always accurate’ and 62% ‘sometimes accurate’.

Over half of respondents said they would like to be able to search for content ‘across catalogues’, combining their pay TV services with OTT and other content sources.

About half of respondents used text-based search, while 20.4% sued voice search to find content.

Some 63.6% of all respondents used monthly SVOD services in Q3, up 7.3 percentage points over two years. Three in five cord-cutters and cord-nevers use SVOD services, while 64.7% with a pay TV service also used SVOD services.

The number using a TVOD service on the other hand declined quarter-on-quarter by 3.5% to 32.7%. Some 34.3% of users of TVOD services also have a pay TV subscription. The major three TVOD providers – Amazon, iTunes and Redbox Kiosks – all say usage drop in Q3. However, engagement, meaning frequency of use of TVOD services, among those sticking with their services is increasing.

TiVo found that use of TV network apps – led by ABC, CBS, CNN, HBO Go and Watch ESPN – is growing.

TiVo found that just over three in five US consumers owned a streaming device in Q3. Smart TVs, gaming consoles and WiFi-enabled Blu-ray players led the way, owned by 25.2%, 23.7% and 10% respectively.

Of the 39.9% without a streaming device, the main reason cited was lack of need on top of a cable or satellite service, cited by 34.3%. The other main reasons cited were lack of familiarity and lack of affordability. A minority said they only streamed content on their smartphone or tablet.