The free-to-download app will also enable users to view short-form clips from MTV content including Catfish, Geordie Shore, Teen Mom and Ex on the Beach, as well as MTV News.

Tom Frazer, VP of strategy and digital, said “We’re proud to be launching MTV Play in the UK as we continue to embrace and expand our multiplatform offering, allowing audiences to access our content wherever they are.” 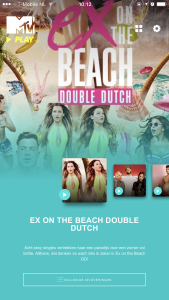 MTV Play launched in the Netherlands earlier this year

Viacom initially launched its MTV Play mobile app in Europe in the Netherlands and Belgium earlier this year. The launch marked the first Play Plex launch for the MTV brand in Europe.

The app, part of a wider group of apps for Viacom’s core brands, gives audiences access to a video-on-demand content library and content that is exclusive on a market-by-market basis.

Viacom teamed up with Sky to broadcast the MTV EMAs in 4K Ultra HD. The deal gave Sky UHD video-on-demand rights to the event, including the full live show as well as an array of shorter assets of individual artist performances.