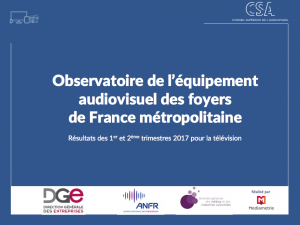 French households now have an average of 5.5 screens, but the TV still reigns supreme with 94% penetration, according to statistics compiled by the country’s media regulator the CSA.

According to the CSA’s Observatoire de l’équipement audiovisuel des foyers study, close to two thirds of households have one or more TVs connectable to the internet.

The study also found that a majority of French homes – some 56.3% – still receive TV signals via a terrestrial aerial, down 2.6% in the six months up to the end of the June. The proportion of homes that receive TV via an internet connection increased by 2.8% in the same period to 54.4%, including cable homes. Some 23.1% of homes received satellite TV.

About a quarter of homes receive TV via a terrestrial aerial only, while a third of homes used several means of reception, most commonly digital-terrestrial TV combined with IPTV delivered by one of the country’s ISPs.

While TVs still predominate, homes composed of single people, students and the young are less likely to have a TV, according to the statsitics, as are homes without children and homes in the Paris region.

Some 80% of TVs that are actually connected to the web are connected via ISPs’ boxes, with 27.6% being connected smart TVs.