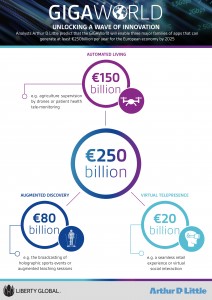 Gigaspeed technologies could generate a market worth at least €250 billion per year in Europe by 2025, according to a report commissioned by Liberty Global.

The ‘Unlocking GigaWorld Innovation’ research, conducted by management consulting firm Arthur D. Little, said that under the right circumstances, the “GigaWorld innovation cycle” will unlock a market of between €250 billion and €660 billion per year by 2025 in Europe. At the global level, the value is expected to be €1.3 trillion to €3.5 trillion per year.

The report defines the GigaWorld as a world enabled by “widespread access to high quality, gigabit internet in which people, machines and the environment collaborate intelligently”.

This will in turn generate the possibilities of technologies like robot-assisted remote tele-surgery, 3D holographic projections of sports events and skyscraper windows maintained by drone-robots.

The report predicted that the GigaWorld market will be unlocked by three major families of ‘GigaApps’ – augmented discovery, virtual telepresence, and automated living.

Augmented discovery – blending digital content with the physical world – is expected to generate revenues of between €80 billion and €175 billion per year in Europe by 2025.

Virtual telepresence – for example virtual social interaction – is estimated to create revenues of €20 billion to €60 billion per year in Europe by 2025.

Meanwhile, automated living – the delegation of human decisions and tasks to technology and appliances – is estimated to reach €150 billion to €425 billion of revenue per year.

Gregory Pankert, partner, Arthur D. Little, said: “After 30 years of the internet, we are entering a new era. The third industrial revolution leveraged the development of electronics, IT and automated production. The ongoing fourth industrial revolution is driven by cyber-physical systems and fuelling a wave of technological innovation that fundamentally alters the nature of digital applications.”