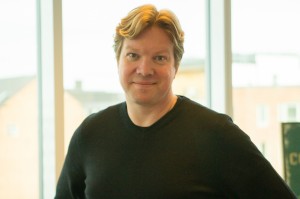 HTC’s senior vice-president of VR, Rikard Steiber, predicted virtual reality will “change the world” as he outlined a number of technological innovations happening in this space.

Speaking at IBC over the weekend, Steiber, who is president of Viveport and SVP of virtual reality at HTC Vive, described VR as the portal that will take us between the real and imaginary worlds and said that “anything is possible in VR”.

“I believe that virtual reality is going to change the world – not just for us as consumers, but us as an industry,” he said. “For the first time ever we’re going to democratise experiences.”

Delivering a keynote presentation about ‘what’s happening in VR, AR and mixed reality’, Steiber said that though we are still in the very early stages of this technology, there are number of innovations coming that will help to achieve “true presence” – tricking your brain into thinking that  “the virtual world is the real world”.

These include a next generation of haptic suits that will allow users to feel real physical sensations from their virtual experiences – for instance with the forthcoming full-body Teslasuit. Advanced trackers with motion sensors will also help make the imaginary world seem more realistic in VR.  However, Steiber predicted eye-tracking would be “the real breakthrough”.

“Eye tracking is going to be a game changer,” he said. “The reason is that when we interact with computers today you’re probably pointing and clicking at something, but very very soon, within the next year, you’ll be able to just look at something to select it or interact with it.”

Steiber said this feature would be very important for users to feel a connection with one another in social VR – one of the many promising areas for VR alongside the likes of education and gaming,  which will benefit from the launch of a number of high profile VR titles later this year such as Fallout 4 VR, Doom VFR and LA Noire: The VR Case Fiiles.

He also predicted that while most VR experiences today are downloaded and played, soon there will streaming VR experiences, allowing users to use VR with the same ease that they can watch Netflix or listen to music on Spotify.

In terms of device types, Steiber said that HTC’s new standalone Daydream-powered devices – which were announced early this year but are yet to launch – will provide a third category in between high-end PC-tethered headsets and low-end smartphone-powered cardboard offerings.

“What’s interesting with virtual reality is that we’re kind of reducing the distance between the real world and the imaginary world and VR becomes this portal that takes us through that.

“The technology that makes this possible is using both our visionary senses, our auditory [senses], but also our body. We can move around. What happens then is that our brain gets so much sensory input that it thinks that the virtual world is actually the real world.”