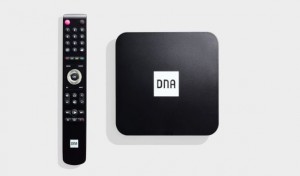 Finnish service provider DNA has launched the DNA TV-hubi, its Android TV-based box that comes with Chromecast functionality built in along with access to Google apps.

DNA initially announced plans to launch the box in May, becoming the first Finnish player to launch an Android-based 4K-enabled box.

The box provides access to the online apps of the major Finnish TV channels, Katsomo, Yle Areena and Ruutu, as well as online apps such as YouTube and Deezer. According to DNA, Netflix will be integrated soon.

The box also includes access to DNA’s channel packages and programming library, and provides access to the company’s terrestrial, cable and IPTV services.

The device is 4K-comapitle and includes two tuners to enable viewers to watch shows and record onto a separately purchased hard drive. The Sagemcom-manufactured device also includes software-based encryption.

Some 30% of respondents, and 42% of 15-24 year-olds, said they had increased consumption of TV content in the last year, partly due to the increased availability of content online.

“The pre-sales of DNA TV-hubi proved that there is a real demand for an Android TV device and a new way of watching television. We have already sold thousands of hubs in advance. People are accustomed to using apps on their phones, and DNA TV-hubi makes them easily available for television, too,” said Mikko Saarentaus, director at DNA entertainment business.