Europe’s German-speaking countries generated pay TV revenues of over €3 billion last year, up 11%, with growth of between 10-12% expected again for 2017, according to German commercial broadcasters organisation the VPRT. 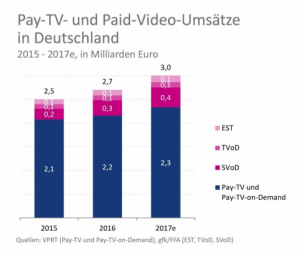 VPRT’s Pay TV in Germany 2017 report said that revenues in the DACH (Germany, Austria and Switzerland) region grew from €2.7 billion to over €3 billion in 2016, while the number of pay TV subscribers grew from 8.1 million to 8.4 million.

Pay TV subscribers in Germany itself numbered 7.6 million, up from 7.3 million.

For 2017, the VPRT predicts a further rise in pay TV subscribers to 7.9 million in Germany and 8.7 million in the wider DACH region.