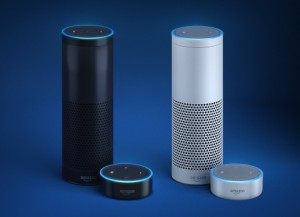 Sony’s 2017 line of 4K HDR TVs with Android TV can now be controlled with Amazon Echo devices, thanks to recent firmware updates.

“Voice control is a natural way to interact with technology in one’s home, and now with Amazon Echo, Echo Show, and Echo Dot owners of 2017 Sony 4K HDR televisions with Android TV can just ask ‘Alexa, turn on my living room TV’ or ‘Alexa, set the volume to 60 on my Kitchen TV’,” said Sony in a statement.

The news comes as Amazon said that it had introduced new entertainment capabilities as part of the Smart Home Skill API.

This means that users can more easily control cloud-connected TVs, AV Receivers and connected speakers by saying commands like “Alexa, turn on the TV,” “Alexa, fast forward” or “Alexa, make it louder.”

The entertainment controls can be used on compatible devices by Sony, Logitech Harmony and BroadLink, with support from Denon, Crestron, LG and Pulse-Eight coming soon.

“Customers are increasingly using voice interfaces as a hands-free way to manage their lives,” said Amazon Alexa evangelist, Jeff Blankenburg. “By using Alexa’s built-in entertainment device controls, you will make it easier for your customers to engage with your device using voice.”